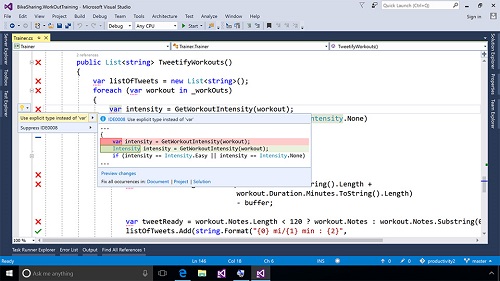 Microsoft Visual Studio 2019 AIO 16.7.0 Update to 16.7.1 | 915 MB
If you during the installation requires a certain pump components or some installation problems ... try pereheshirovat this hand and hand with 16.7.0 and run self-diagnostics Installer (More \ ForIntegrity \ Check_ .cmd).

React depending on the diagnostic results (well, that is, either unsubscribe here an error in the distribution or downloading files krivovykachannye components again)
There may be difficulties with the studio upgrade. Vote on your experience in connection with this problem in the top Updating a previous version of the studio without access to the Internet and at the same time
When upgrading the studio prefer to do this than through a pop-up automatically prompted to update the studio, and abandoning him use "Download and Update". This will allow you to first see a problem with the update sooner than the studio to start deleting components already installed (in time to opt out of this for the sake of her health). The second problem with the update in this case, there is less.
The essence of the problem with updating studio in offline mode is that the installer studio sometimes does not see part of the downloaded components if the name of the folder from which you run the installer, is different from what it was when you install the studio. If this happened to you then you need to either restart the installer but from the same folder, or just rearrange the studio, or to provide access to the Internet
Read more about the problem with the studio update
Other restrictions
Installation / Upgrade Microsoft Visual Studio 2019 16.7.x (supports all studio version)
The distribution of materials laid allow to install or upgrade (if already installed) Microsoft Visual Studio 2019 to version 16.7.1+. To do this, first update installer 16.7.0 using the hand, and then immediately put you conceived version 16.7.X (without the need to pre-set the previous versions such as 16.7.0, 16.7.1, ... although it is not prohibited). Go back on the versions will not work (only the removal and installation of the required previous version)
In short it to install / upgrade 16.7.X need to: update installer to install the certificates (if this is the first installation of the studio on Windows) and run the installer. details:
1. First update the installer. Swing this distribution directly to the folder where downloaded the Visual Studio 2019 distribution 16.7.0
2. Becoming certificates (if necessary). It should be - it is if the installer studio will not have access to internet before you certificates Studio 2019 is not set. Putting them running Certificates_Setup.cmd by the Administrator. At the same time, I note that re / VL nothing spoils certificates.
3. Then put 16.7.X: Run the file Setup_ .cmd, where
- Visual Studio edition that you need (Enterprise, Professional, Community, BuildTools, TeamExplorer, TestProfessional)
- the version number of the studio 16.7 you want to install.
If you do not put the latest version of Studio that access to internet is better to disable the installer (otherwise there is a chance that the installer will deflate the most recent list of ingredients and begins to put against the wishes of the studio the most recent version)
I also note that using this distribution, you can install any version of the studio laid out here. This dignity distribution (even for the case when you have a fast internet) before the online installer which is possible to put any previous version does not. Revert to a previous version of Studio, you can only remove completely the studio and putting again but the desired previous version.