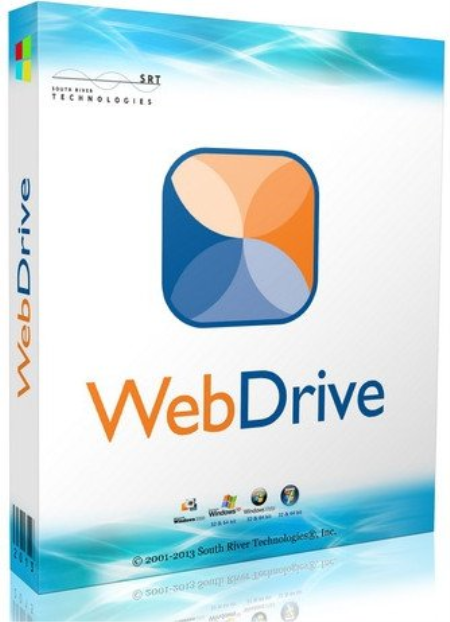 WebDrive is an intuitive software that facilitates a quick access from your computer to a remote or cloud drive.

The software enables you to map a drive letter to a FTP, SSL or WebDAV server, as well as create a shortcut to your cloud account hosted by Google Drive, S3 or Dropbox.
Clear-cut interface and easy connection

With WebDrive, you can create a quick path from your local folders to a remote storage space, FTP server or cloud account. It simply maps a drive letter to the selected path and allows you to access it from Windows Explorer. The drive appears in Computer as a network location, that you can access like any local folder.

This shortcut facilitates the file transfer and synchronization between local directories and the remote location, as if you were copying files from one local folder to another. Similarly, you can open any application or file stored on the server or storage space, on your computer desktop, using local readers.

The software allows you to create shortcuts to many servers, via HTTP, HTTPS or SSL secure connections. The supported services include WebDAV, FTP, Google Drive, S3, SFTP, Dropbox, GroupDrive and FrontPage Server. You can set the software to start with Windows and enable the connection to the specified server as you turn on your computer.

Create a shortcut to your cloud storage space

WebDrive enables you to create a direct path from Windows Explorer to the selected server and manage the content of your folders. File transfer and synchronization are also facilitated, since you can open and manage the files on the server as if they were stored locally. Moreover, the software can automate the connection to the servers, enabling them at Windows start up.

WebDrive's instantly familiar interface lets you fluently work with cloud storage, local files and files on remote servers through one common access point. Use WebDrive instead of the traditional FTP Client, WebDAV Client or SFTP Client to reduce the steps of updating remote content. Connect to popular cloud storage servers through the convenience of a drive letter.

WebDrive was created with IT managers in mind, so supporting WebDrive on a large number of desktops is simple. No more installation insanity. WebDrive lets you preconfigure settings and distribute them to your users. Protocols, ports, IP Addresses and other settings are configured once by the IT group. Users don't need to know any information except their username and password. This avoids installation errors and manually configuring dozens or hundreds of PCs.

Reduced Training and Troubleshooting. Since users already know the WebDrive interface, you reduce the training often associated with implementing new applications. WebDrive's cost-effective multi-seat licensing allows easy standardization of your file transfer software, rather than having users a variety of applications that your IT team has to support.

Simple for the Novice, Powerful for the Super-User

- FTP resume interrupted - if connection has been lost during a file transfer, WebDrive can resume from the point where there connection was lost, rather that restarting from the bning.

- File locking - when used with WebDAV servers. This prevents users from accidentally overwriting another user's changes.

- Backup Utility - WebDrive includes a simple backup utility so that you can easily back up your PC files to an offsite server.